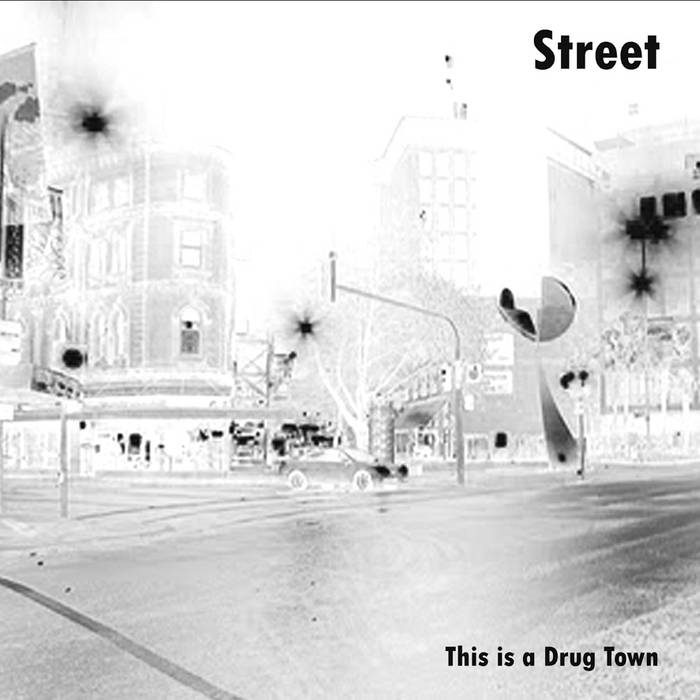 The return of Street after an 8 year break during which Antony Milton and Greg Larking (of solo project 'Russell Street') lived on different islands in New Zealand. With Milton temporarily relocated to earthquake damaged Christchurch, and thus within spitting distance of Larkings home in the port town of Lyttelton, the opportunity to reform the band was too good to pass up.
Playing together since the mid-1990s Street really hit its stride around 2000 with a couple of releases on what was then a very young PseudoArcana (in fact one of these - "street=x" - was an Aquarius Records 'album of the month' and thus a key release in the overall development of the label). These releases were followed up by a release on Glenn Donaldsons Pink Skulls label "School of Religious Studies" which saw the sound of the band evolving out from what had been an exclusively harsh-noise (mainly electric violin and organ) project to encompass drones and even some song works.
'This is a Drug Town' (named for the somewhat grim and ugly hard drug culture of the South Islands largest city..) was recorded as a single piece on a late winter afternoon to 4 track tape with Larking playing synth and guitar and Milton on guitar, violin and bass. The otherworldly beauty and strangeness - the sheer variety of moods- of the resulting work caught them both by surpise. Over the course of 40 minutes the piece naturally evolves from cymbal washed drone to Can-like prog to beatific blissed out shoegaze shimmer and wooze and back again.
Given the special nature of this recording it was decided to release it as a lathe cut LP. These have have now sold out so here is a digital version for you,